An Inside Look At Driving In Northern Thailand

To begin with, I tend to be a cautious driver: I don’t go much faster than 73 MPH on the US Freeways. I’d be lying if I said I wasn’t hesitant about driving in Southeast Asia. The initial thought of driving here freaked me out.

We visited Thailand for the first time in February, 2014. We were faced with an opportunity to rent a motorbike in Phuket; it’s in the southern region of Thailand. Although I had heard “bad things” about driving in Thailand, my first thought was that it couldn’t be too bad.

Despite my optimism, Taiss cautioned against the motorbike rental in Phuket (good decision at the time). We opted to take a cab to the nearest beach.

Fast-forward to December, 2014: We are living in Chiang Mai. Despite our cautious ways there was no doubt we needed a better way to get around town.

Why We Changed Our Minds 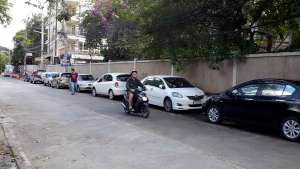 1) We heard that Chiang Mai drivers were more cautious than Thai drivers from the other regions (ie, Bangkok and Phuket. During our first two weeks here we observed that to be true: The Northern Thais drive with a lot more patience and caution.

2) We plan to be here for at least 6-months. Yes, we do live in an area that’s surrounded by restaurants, 7-11s, and other convenient shops, but it gets annoying. We’re not being lazy (well, kinda) but constant walking wears on you mentally. Also, a motorbike is a huge time-saver: Waiting for taxis is a huge time suck. It’s nice to have flexibility in where we can eat and shop. 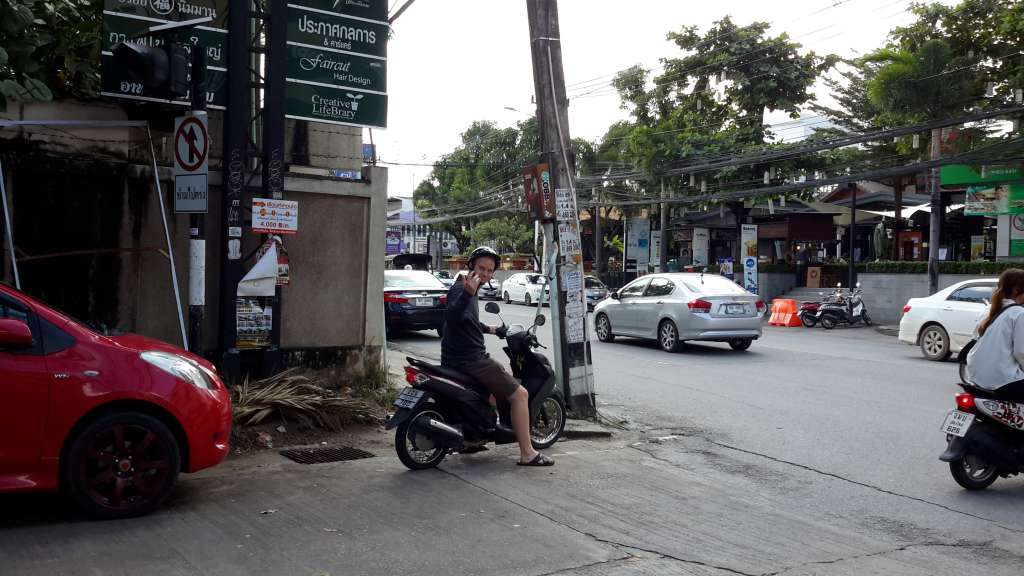 3) We live near the main street, but we’re far enough removed that we could start slow. The hardest part about driving here is getting used to being on the left side of the road; it can hurt your brain when you get to a four-way stop and don’t know what’s going on.

So far, the experience has been positive, and we’re confident to take the roads at any time. That said, we have made some observations about driving in Chiang Mai that we would like to share.

Update 01/12/2015: Taiss took the bike on her own and rode out the fruit market (about a 10 minute ride through town). She came home with a huge backpack full of fruit.

Where We Got Our Motorbikes 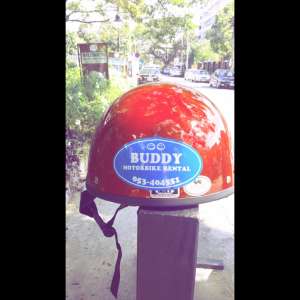 We got our bike from a shop called Buddy Internet. We went with a no frills model and it came out to 2,500 Baht per month (around $85 USD).

The insurance for the bike covers the people riding the bike. It does not cover damages to the bike or other people in the accident.

They required a copy of our passport and a $100 USD deposit. We gave them a $100 bill USD and they were happy with that.

There are a ton of motorbikes. And there are unwritten rules. 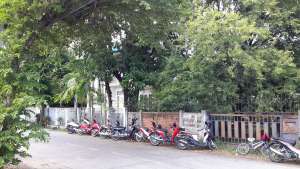 There special rules for the motorbikes. I’m not 100%, but I feel confident none of them are in the vehicle code; they are unwritten rules. Cars and trucks purposely leave space in front of them at red lights. That space is meant for the motorbikes drivers to congregate.

Cars and trucks also try to leave space so motorbikes can weave through (mostly at stoplights). The weaving between cars rarely happens when vehicles are in motion. It happens when everyone is stopped at a red light. Imagine fifty cars between our motorbike and the red light. Unless some car blocks the road, all the motorbike drivers will weave their way to the front of the line. That’s just the way of the land.

Note: If it’s your first time taking the roads, don’t feel pressured to weave through all the cars. If driving a motorbike, it’s totally fine to sit in between cars at a red light.

Reduced traffic is the best perk of riding a motorbike. Cars and trucks definitely move at a slower pace as they can’t weave through traffic.

Way more big cars than I ever imagined.

It’s no shock when you drive in America and see pickups, SUVs, etc. That’s simply the norm. If you’ve ever been to Europe you probably noticed the cars are small. There just aren’t many big vehicles out there.

I thought that Thailand would be similar to Europe, but that’s not the case. There are pickups, trucks, and SUVs. Definitely not what I was expecting. 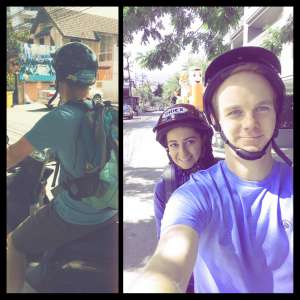 Motorbike riding – Together in Thailand

Not much to this one. We always wear our helmets as we don’t want to get pulled over by the police. We read that the failure to wear a helmet is the number one reason why foreigners get pulled over here in Thailand. Nevertheless, we see plenty of people without helmets on a regular basis, unfortunately.

There is a flow to the way they drive.

It’s tough to explain with words, but there is a certain flow to the way people drive here. Taiss says it’s, “a choreographed dance”. I call it a “controlled chaos”. At first glance, one might think there are no rules and that people just do what they want.

That’s not the case. There is a subtle, unwritten code that just flat out works.

First off, the bigger cars have the right away in Thailand. If you’re a motorbike you’ll need to slow down for the big cars behind you. Motorbikes tend to congregate towards the left side of the road (that would be like the slow right lane in the States). The only time you move to the right is when you getting ready to make a right turn (or U-turn).

You are responsible for what’s in front of you.

There’s a lot of trust that goes into this style of driving. Most Thai drivers do not look backward. They rarely use their mirrors. Instead, drivers must account for the cars in front of them and adjust accordingly.

It helps that about 90% of the drivers use their turn signals (kind of shocking, but it’s true). You watch what is going on in front of you and make room for it to happen. If someone needs to get over they will move without looking back. They trust that if you’re behind them you will account for this maneuver.

Same goes for making turns in front of traffic or crossing the streets while walking. If you make the aggressive first move by showing intent, you will be rewarded with the right of way. Cars will adjust (usually slowing down) and make room for the maneuver. There’s no room for a passive style of driving!

Well, that’s about all we have for driving a motorbike here in Chiang Mai, Thailand. If there’s something we missed or you have any questions, just drop us a line below and we’d be happy to answer.

"Peace is the highest bliss" "The most valuable service is one rendered to our fellow humans" "poverty and dignity is better than wealth based on shame" "Failure teaches a man how to succeed" "virtue is more valuable than university degree" "As you sow so you reap"      ... ...